Giving me the stick. 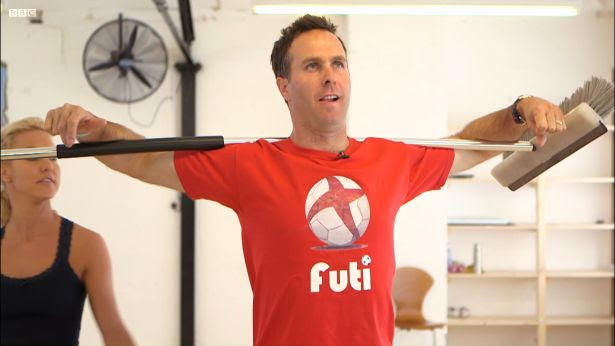 This past Thursday Coach M. gave us the stick.  OK, OK, she brought in several broomsticks to use during class to help improve our posture.  No cheap jokes will be repeated on my part about how she rode in on one.  I'm above that sort of immature humor. (Ta-Ta Boom!)

So anyway, here's the deal:  you take a broom stick and first off, you grab it in both hands and skate with it in front of your body while doing progressives, etc.  After doing that for a while you then graduate to placing the stick behind your shoulders and lacing your arms around it.  The stick hits your backbone and reminds you to straighten up and fly right.  No bonus points are awarded if you toe-pick and do a face plant.  What will next week bring?  I can't wait!

She must think my skating is salvageable-- she's pumping a hell of a lot of energy into me.

Horsing around; An Ice Dance Update.

It's been awhile since I've posted anything about my attempts to learn the fundamentals of ice dancing.  About a month ago my dancing partner sidled up to me while I was removing my skates at the conclusion of a public session.  She'd been MIA for several of our coached lessons.  She said "Hi" and then announced that she was "divorcing" me as an ice dance partner.  Seems as though she'd rediscovered her earlier enthusiasm for horses. She explained that she couldn't afford the time or money for two expensive activities, and so I got the heave-ho.  Upstaged by a horse!  Can you believe it?   Well, it was fun while it lasted, I learned a thing or two about ice dance partnering and have smears of white polish and a couple small scars on the outside edge of my right skate boot to prove it.

So V. has written herself out of the script, but as one door closes, another opens.  Bowie Ice Arena, for the first time in many years, decided (who knows why?) to add back group ice dance lessons as a trial balloon for the month of September.  The timing for the four Thursday lessons was listed on the September schedule as starting at 4:30 in the afternoon. This almost guarantees exclusion of working peeps.  I normally get off work at that time.  My job is a minimum of 30 minutes away from the rink on "good" traffic days. I told myself if I were to sign up for this set of four lessons I'd need to take an hour of leave each Thursday afternoon--and so I have.

As I signed up, I briefly wondered if I'd be the only adult.  I had visions of being paired with a short, impatient ten year old who skates better than I do.  The things I do for art...

OK, so last Thursday was the first lesson.  The mythical ten year old didn't materialize but another adult (female) skater did.  It turned out that we were the only skaters to sign up for dance--perhaps not a good sign in terms of ice dance group lessons continuing into the fall, but we shall see.  N. my group lesson partner is a pleasant woman whom I've previously encountered in adult group free style lessons.  The coach for these lessons was not my familiar Coach K. but that's alright; my skating will get looked at from a fresh perspective, which might be a good thing as I'll discuss later.

Coach M. started us off by talking about posture: roll the shoulders back and stand tall.  She briefly addressed the importance of extension and toe pointing and then had us do continuous forward outside edges as a segue into forward swing rolls.  She watched and immediately questioned me if I was left handed.  I told her the story about how in grade school penmanship class you'd get smacked if you picked up the pencil with the left hand and so, although I'm right handed, I'm a suppressed leftie.  She had me do a few more edges and swing rolls and then said "you may have an equipment issue."

Wow! Stop the presses!  Maybe some small fragment of my pathetic skating can be chalked off to an "equipment issue" rather than lousy execution by the skater!  Whoot! Whoot!

After the lesson we discussed the ins and outs of tweaking blade positions and conducting minor boot modifications.  It was decided that I should book an appointment with Mike Cunningham, a locally well known skate technician, who runs a business down in Waldorf, Maryland called Skater's Paradise.  Saying that Mike Cunningham is good is an understatement--he was selected to be the skate technician for the US Olympic Team at the recent Sochi  Winter Games (Skater's Paradise was closed all of last February).  I haven't called to make an appointment yet.  I assume it will be weeks before I can see the man and I'm wondering if a guy as low as I am on the figure skating food chain really rates the time of such an august specialist, but call him I will, and assuming I'm  granted an audience with Mr. Cunningham, my low level Jackson Freestyle skates and I will go under the maestro's microscope.

Will I suddenly be transformed into an elegant, pain-free figure skater after having my boots and blades massaged by this talented artisan?  I kinda doubt it, but at least after a session with Mike C. I'll be able to rule out faulty equipment as an excuse and reclaim total possession of  all my short comings!
Posted by George A at 4:20 PM 4 comments: