Dusting off the Cha-Cha

It's been two weeks since I passed my last two Prelim dances.  During that time my old computer died and took all my bookmarks to the grave, but regenerating all that will no doubt be a good workout for my aging brain--kinda like Sudoku or a crossword puzzle--but with a useful purpose.

Coach A. and I have been working on getting me reacquainted with the Cha-Cha and also working on my wonky right forward inside Mohawk in anticipation of those steps in the other two pre-bronze dances, the Fiesta Tango and Swing Dance.  Those in need of a refreshing peek at the Cha-Cha pattern can find it here.

After a brief struggle with the inside RFO chasse and following wide step she decided to have me work on the end pattern of the dance (steps 10 through 14)--but without worrying, at least for the time being, about the tuck forward or tuck behind bits.  Little by little I'm stitching the beginning, middle and end parts of this dance back together in my mind.  Transferring all that mindfulness to the ice is of course a different kettle of fish.  It's both comforting and daunting to realize that the Cha-Cha is the last of the "easy" pattern dances to master: familiar Killian dance hold, only fourteen steps to think about, no turns or backwards skating.  Both the Fiesta Tango and the Swing will be much more challenging.  The Swing Dance in particular will be twice the work because each partner has to learn the other's steps.  Unlike dances up to and including the Cha-Cha which have around 14 or 15 steps, the Swing has 30.  Also, unlike the earlier dances, both the Fiesta Tango and the Swing Dance bring transition steps and backwards skating to the party.  Dear Constant Reader:  prepare yourself for lots of reports of "retry" test results!

This weekend marks my rink's annual Valentine's Invitational Competition.  I'm sitting this one out but will be at the rink as a registrar and to watch friends on the ice.  Also this afternoon one of my nieces is visiting from Georgia and we'll no doubt get over to the rink for today's afternoon public.  This is one of the two nieces responsible for re-interesting me in the sport (after a 30+ year lay off) seven or so years ago.  So far her fascination with ice skating has cost me two busted arms and a brain hemorrhage (!) but also countless hours of satisfaction and good exercise, which in turn, has led to this blogspot.   She loves to skate but lives in an area of her state far removed from ice rinks.  We try to bake in some ice time whenever she visits.

So that's about it.  Nothing too exciting, nothing to prove here at On Thin Ice.  Just chipping away at the next dance, doing my duty with the ISI annual comp, and going skating with the niece.  Slow and steady wins the race.  Until next time, ~Ta.
Posted by George A at 11:02 AM 5 comments:

Email ThisBlogThis!Share to TwitterShare to FacebookShare to Pinterest
Labels: Ice Dancing, This & That

All in good time.

People keep telling me that I need a cute little clock like this: 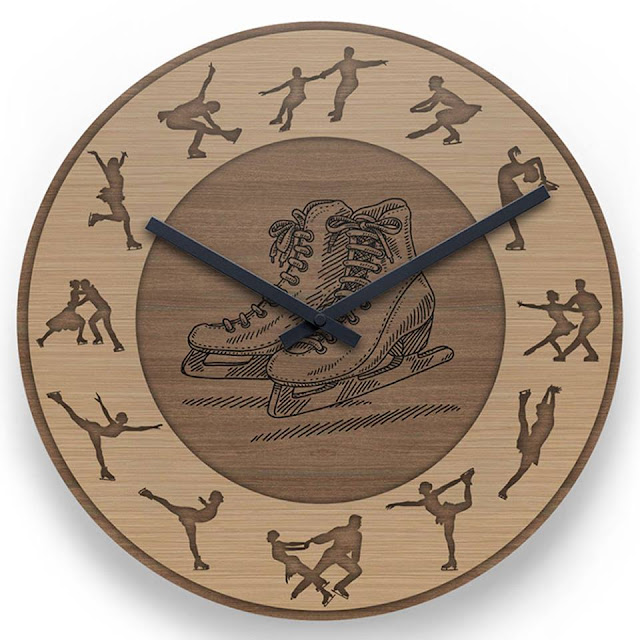 I tell them the only time of day device I need looks more like this: 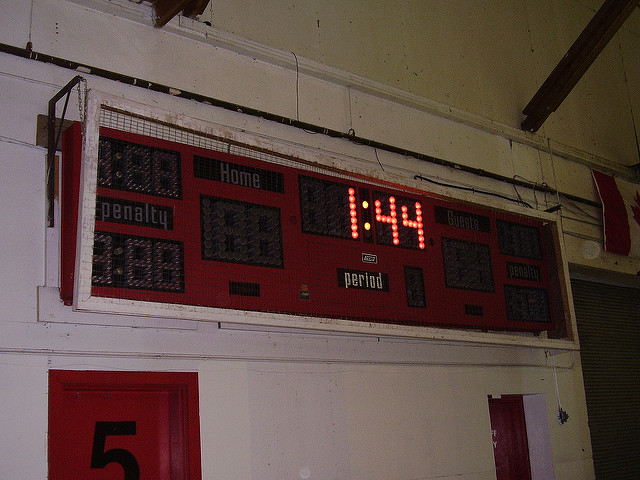 Email ThisBlogThis!Share to TwitterShare to FacebookShare to Pinterest
Labels: This & That, Total nonsense

For the short attention span brigade:  Yesterday afternoon, I finally passed the two remaining dances to complete USFSA's preliminary ice dance level--and so onto the pre-bronze level dances.  Next up:  the Cha-Cha.

For the rest of my faithful readers (both of you) I'll drag things out a bit.


First up were skaters testing Moves and Free-Style tests.  After an ice cut Coach A. and her coach started off the ice dance testers with the midnight blues.  Sadly she was scored "retry" which was surprising to me but then I'm just a low level tin horn who no doubt doesn't appreciate the intricacies of that level of dance.  None the less the result was a disappointment.  We spoke afterwards and she pointed out that there was an on-going free style session on the other sheet and knowing how long it takes me to warm up, and since I had thirty minutes before my group's time, that I should take advantage of the opportunity.  "Just keep an eye on the clock." was her parting remark.  I paid up, laced up,  got on the ice and warmed up my two dances--the Dutch Waltz which I'd been scored "retry" back in the spring and the Rhythm Blues, the last dance in the preliminary group.  It seemed I'd no more that settled in to practicing when I heard someone yelling my name.  "Hurry up!  They're ahead of schedule--we're on!"  Yes, Ma'am.  Where did twenty minutes go?

We clomped across the lobby in our skates to the other sheet and just caught the last couple minutes of my group's official warm up.  With just enough time to plow through the two dances, I felt fairly good, particularly so with the trickier RB.  This was almost my undoing.  When we were called out for the test I suddenly felt kinda jittery.  We skated the two dances with lots of awkward scratching and clumsiness on my part.   I came off the ice knowing that my practice dances were much better that what I'd just skated in front of the judge. I silently cursed and wished that I could somehow swap them.

And yes, that's judge singular.  This test session had just one judge rather than the three judge panel that was in place when I tested back in the spring at Piney Orchard.  Apparently if the judge is highly accredited, only one is required.  I don't completely understand that, but that's how Coach A. explained it.  Getting back to today's test, after leaving the ice I figured if I passed the DW I'd be lucky.  I was mentally preparing myself for "retry" scores for both dances.  We clomped our way back to the lobby and took off our skates while waiting for the runner to bring the results from the judge to the registrar's table.  In due time they came. Coach A. went over and picked them them up and then showed them to me:

You could have knocked me over with a feather.  The Brits have a word to describe this sort of amazement:  Gobsmacked.  I was totally gobsmacked. I was convinced that I'd blown the test and skated my best effort during warm up.  But the judge saw things differently.  So after a long, slow slog I'm finally finished with prelim dances and can now contemplate ones at the pre-bronze level.  Pre-bronze--I guess that officially makes me a stone-age dancer.
Posted by George A at 12:02 AM 18 comments:

Email ThisBlogThis!Share to TwitterShare to FacebookShare to Pinterest
Labels: Testing

Ah, another skating book with a 1980 publication date.  How can I resist?  1980 must have been a magical year.  This time the book in question is Figure Skating with Carlo Fassi.


One of the things that attracted me to this book is its extensive coverage of compulsory figures.

Can one teach one's self from a book?  Worth a try:


This is a pitiful excuse for a Forward Outside 8, but somehow I got around.  No one will confuse these videos with those of Kseniya and Oleg!

This attempt at the Forward Inside 8 is worse. I'm way off center for the repeats and the missized circles are a joke.  If anything I think the two kids pushing the EZ-skater thingies actually helped by forcing me to go back to the center of my figure more consistently towards the end!  Perhaps I should look into hiring some young people to harass me during practice.

The trouble with refinements

Refinements.  Just when I think I've got things under control with the two dances I'm scheduled to test this Friday Coach A. introduces yet another small refinement.  The trouble with late in the day refinements is that in the process of trying to incorporate them I inevitably lose control of the larger picture.  Free leg extension, toe point, holding edges for the required number of beats, the list goes on.  Yesterday we had our last lesson prior to the test.  Midway through, she told me to concentrate on timing rather than sweat all the small stuff.  I think that's wise since I won't get another shot at ice time before Friday.  The evening free-style session we use for my lesson was crowded and a bit frantic last night.  Lots of skaters were prepping either for tests or up-coming competitions.  One girl in particular seemed to have impeccable timing: she managed to blindly cross our path several times while we were partnered.  She always had that Bambi in the headlights look in her eyes, as if she was thinking "where in the world did you suddenly come from?"  No injury/no foul but I don't think we got in more than a couple of complete patterns of either dance.

It turns out that I'm not the only one with a dog in this Friday's fight.  Coach A. is testing the Midnight Blues, an International test level dance.  She indicated that she and her coach (yes, my coach has a coach--how great is that?!) had a good run through, a not so good run through and then a so-so one the last time they practiced.  She's passed four other International dances and her goal is to pass five of the ten currently on the list. She doing the ice dance equivalent of a PhD dissertation while I'm trying to move out of pre-school!   Fingers crossed for both of us.
Posted by George A at 11:39 AM 6 comments: