The Devil is in the details 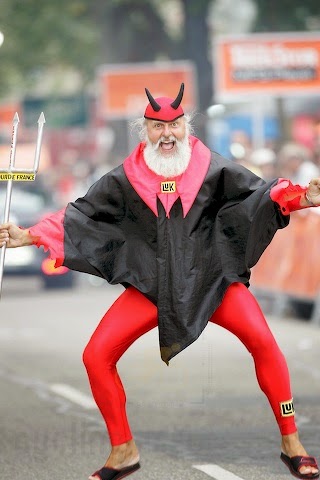 I'm beginning to think that I shouldn't be permitted to skate without supervision.  No, not because I'm getting so old that I might wander off but rather it seems that when I practice stuff in the absence of a coach bad habits creep into my skating.  This was brought to light last night when coach K introduced me to the waltz eight, a component of the USFSA's adult pre-bronze moves in the field test:

This figure-8 pattern harks back to the origins of "figure skating" as it is an actual "figure".  The "waltz" part of this element comes from the fact that the skater is supposed to execute the various edges to a six count cadence, i.e. in waltz time.  To do a waltz eight the skater pushes off at the bottom of the top most of the co-joined circles onto a right outside forward edge.  This edge is held for a count of three.  The skater then does a 3-turn onto a right back inside edge which is also held for a count of three (six total).  Next, after a pump of right skate to maintain momentum at about the 10 o'clock position on the circle, a left outside back edge is held for a count of six.  At that point (~2 o'clock) the skater steps around onto a right outside forward edge, again held for a count of six.  This returns the skater to the bottom of the top circle.  Without stopping or hesitation, the skater then does the mirror image of these maneuvers starting at the top of the bottom circle.  To complete the pattern, the skater must go around the figure twice without stopping or putting down an inappropriate foot.  And although the two tracings from the blades no longer have to be exactly on top of each other, one must strive to keep them as close as possible in the hopes of a passing grade from the panel of judges.

This is where all those bad habits I mentioned at the beginning of this post come home to roost.  Come on--any skater can do a couple of three turns and strike some edges, right?  Yes, but probably not with this level of control.  Compulsory figures are where the rubber hits the road.  It's one thing to be able to do relatively simple skating elements when it feels "right" to pull the trigger and a whole different kettle of fish to do them on a defined pattern with this level of precision, not to mention the timing aspect.  Needless to say your diarist quickly discovered the limits of his mastery.  We gave up attempting to perform the figure and spent the remainder of the lesson beating the demons out of my three turns.  This was a bit humbling.  I'll be the first to admit that my CCW forward 3 is a bit wonky most of the time but I was surprised that, when applied to the pattern, even the 3 in my "strong" CW direction was not up to the task.  Lots of refinement needs to take place before I can hope to pass pre-bronze.  The good news is that when I'm good enough to demo a passable waltz eight pattern, I really will own the turns and edges required by this pattern.  Now if I can just remember all of the (many, many) things that coach K. said while I practice alone...


The waltz eight performed at a passing standard.
Posted by George A at 12:52 PM

Email ThisBlogThis!Share to TwitterShare to FacebookShare to Pinterest
Labels: Compulsory figures, Moves in the Field