The essence of dance. 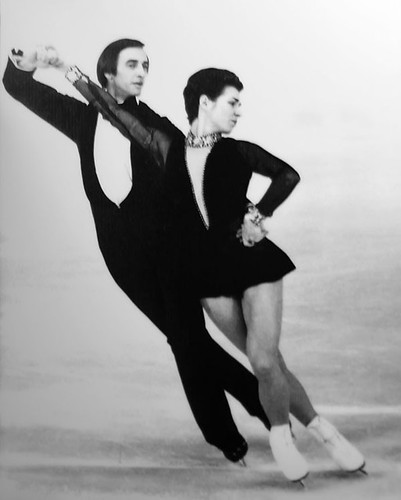 I've been taking ice dance lessons for about a year and half.  One would think I'd be better at it by now.  Instead, I'm like the annoying eight year old kid in the apartment directly over yours who practices his trumpet each afternoon at precisely those times when you're trying to nap.  Every day that brat runs through the scales and hacks his way soullessly through the same handful of simple tunes but he just doesn't seem to be improving.  On the rare good days when you're sober and he's at his best, you listen and decide that yeah, OK, his playing is technically proficient--but it lacks emotion.

And that's where I am with ice dance.  After a year and a half of work, like the kid upstairs who knows the notes and timing requirements of the different pieces of his limited repertoire, I know the steps of the three preliminary dances and have a notion of their required timings and where the patterns must be on the ice.  On good days I can even execute the steps in such a way that my coach can watch and (a). realize that I'm skating a pattern dance and (b). not have to squint too hard when attempting to guess which one.  But something is lacking.  That something is emotion or essence or perhaps the best word is expression.

What is dance expression?  Trust me, if I knew the answer this post would be entirely different.  For one thing, I'd be all braggy about how great my execution was and probably I'd be salivating over the prospect of conquering more complex dances.  Sadly, this is not so.  I'm just a slow learning clod hopper from the country without much musicality.

Now before I totally paint myself in a corner, I'm not totally clueless.  Even I grasp the fundamental differences between a Waltz, a Tango, and the Blues.  The Tango demands crisp movement with "attitude" while the Blues is "swingy" with big easy curves, smooth as molasses.  The Waltz is slower than the Tango or Blues and requires a more elegant and refined approach.  The question is, how does one incorporate these differences into skating elements?  A progressive is a progressive regardless of whether it's done during a Waltz, a Tango or a Blues dance.  How does one shift gears to make a swing roll a Waltz swing roll rather than a Blues swing roll?  I don't have an answer today but at least it's dawned on me that I should be thinking about it.  Hopefully I'll figure some of this out before I'm too old to dance!