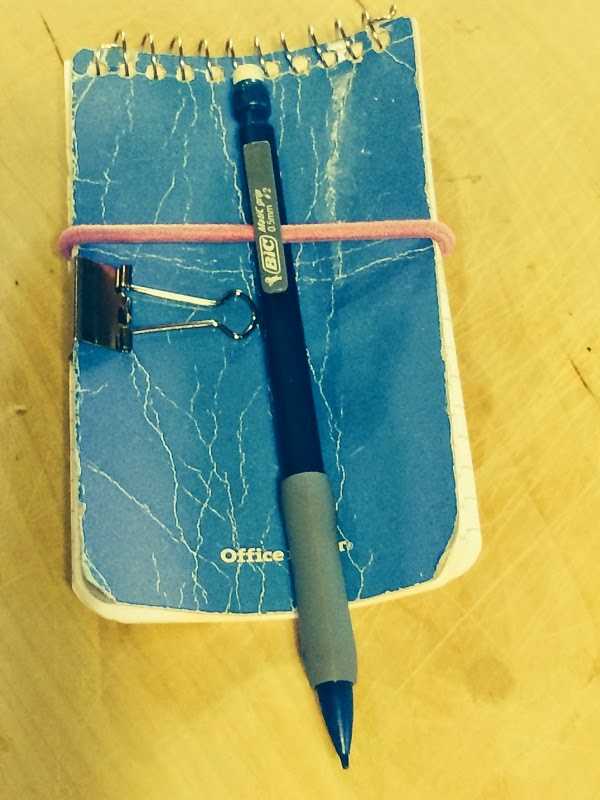 A.  It's Friday.  I didn't need bail bond money and there's no bodies to hide, so overall a good week.  I did have three chiro sessions this week.  And although I know it's a tad early to expect results--I just have to ask if I'm noticing anything.

B.  Don't know about you but I have expectations ahead of each session I skate.  I have a little blue notebook plus pencil in my pocket which goes with me to the rink (pens tend to freeze and not write when I want, which leads me to heave 'em in the trash can.  Yeah, I know, NASA burned through a lotta tax payer's dough designing a fancy ink pen that will write in the cold of outer space.  Trust me, pencils are cheap and write regardless of the rink temps).  Anyway, I jot down a few things that are bugging me ahead of time so not to totally waste valuable ice time.   Here's today's entry of what I planned to work on (raise your hands if you have a few items to work on, either on paper or in mind before you go to the rink).

Edited after publication: A tip of the space pen to Babbette, of "The Ice Doesn't Care" fame for correcting me on the origin of the space pen.  Apparently this is a misnomer not unique to your old diarist. The real story?  NASA did start development of this item but costs soon proved prohibitive and later on the Fisher pen company took on the task of getting an ink pen to work in a zero gravity environment.  NASA bought the pens from Fisher at a reasonable price of $6.00 per pin.  For what it's worth, I'm still sticking to a pencil!

1. CCW FI Mohawks as an isolated element (weak direction)--any better?  Yes, my right leg (the entry edge) is the stronger leg, but it's the wonky left leg that just doesn't want to come around to the instep and take the load as the exit edge, and that's the problem.  As a result, my left leg is coming down on the ice behind the skating foot and sometimes a little outside the circle.  I know what's wrong--I just can't fix it!  It drives me crazy and holds me back on a number of fronts because it's the set up element for lots of jumps, etc.   (Ok, I'm being nice here.  After three chiro sessions I would say a skeptical maybe.  They seemed a little better but not by much).

2. FI Mohawks into back cross-overs (both directions).  I know the ones going in the CCW direction are stronger--but it that a training/coaching effect or the effect of the guy yanking on my legs? Can't say. The CW direction is the weak direction for this element.

3.  Back cross-overs on the circle and alternating down the long axis with special emphasis on the CW direction.  Yes!  Definitely an improvement.  I can feel the power during the under push. But mostly on the CCW (strong) side.  At least I'm "sitting down in the chair" and leaning into the circle enough to get off the toe picks and get a decent edge for a change.  CW side is still hit and miss--but better! (Stoked!)

4.  Pre Bronze cross-overs on the figure 8 pattern.  I worked on these but there's still a lot to work on.  Given the public session traffic, I'll grade them a "not bad, work in progress".  I cheat by starting off  to the right so that when I need to do the edge change Mohawk it's on my strong side.  Hey: I'm sure the judges will prefer seeing a clean Mohawk rather than  my impression of a "dead bug" pose.

5.  Canasta Tango pattern.  I should remember this by now but when it's not part of a coached session for several weeks I tend to lose track of the steps.  Dance coach brought it back to the front burner this past Tuesday and I was lucky to remember half of it.  Only a few kiddies with E-Z pushers were brushed aside during the practicing of this pattern today.  (I currently have it again--here's hoping I remember it by the time Tuesday rolls around.  Must ingrain it on Sunday if I get a chance to skate.  Why is it so hard to remember this stuff?)

So, that's it.  My notebook is small.  Mercifully one page can only detail 5 or 6 things to work on plus notes on the fly--and that's probably a good thing.  Moves-coach is off this weekend keeping her chicks in a row at ISI districts over at Talbot, so no 7am lesson for me tomorrow.  Have a great weekend.  I'm sleeping in!
Posted by George A at 9:58 PM